How can longed-for time together not lead to “Cabin Fever,” before long? (Yes, this is being written during the 2020 Coronavirus pandemic.)

“Cabin fever” originally referred to Typhus, but came to describe “the need to get out and about” after days of being trapped in a cabin by harsh elements.

There are so many things that could be focused upon, from the need for time together and time apart, to the need for sunlight, exercise, nature, restorative music, reduced screen-time, good nutrition, solid sleep, and fasting from news and social media. But this article will assume that one shares a cabin—and thus a fever—with other humans, and will treat a key component to interpersonal communication.

The main thing that challenges relationships in close quarters is that we lose autonomy. Things that we used to decide ourselves, without debate—even automatically—suddenly become agenda items for a cabin committee that is  always in session. Pre-lockdown, we’d worked out our routine of home-to-work, work-to-home, time with others and time alone. We knew our place and others knew theirs. Such routines and fairly independent patterns are a fading memory as a new routine is worked out, not independently, but with perpetual consideration for our cabin-mates. Those quick autonomous decisions—when to shower, what to eat, where to work or study, what is playing on what screen or speakers and how loud, what rooms to be in and when, who to be around, when to take breaks and where—all become dyadic discussions, group debates or hostile negotiations. It can be stressful for everyone as something so simple as turning a dial becomes a turf battle. So, what makes the  difference between a home filled with peaceful vacationers and a cabin filled with fever-ridden adversaries?

The first thing is a mind-shift—we’re not in this alone. Autonomy is easier; relationships are harder. Relationships require consideration, empathy, understanding, and mutual support (unless you’re an adult whose cabin-mates have still-forming brains; then your expectations must be checked against developmental reality). This takes doses of patient listening, self-control, gentleness, servant-heartedness, sacrifice, yielding and love. It takes conforming to one another rather than trying to transform one another into ourself…. “Do things the way I do; have the same preferences I have; want what I want, feel what I feel, think what I think, and share my opinion on everything.” That’s not gonna work; better pitch a tent in the back yard.

Relationships are about adjusting to each other, and adjusting peacefully means listening more than talking and wanting to understand as much as wanting to be understood. Preferably more (see separate blog on Dynamic Tension). The following illustration may help. 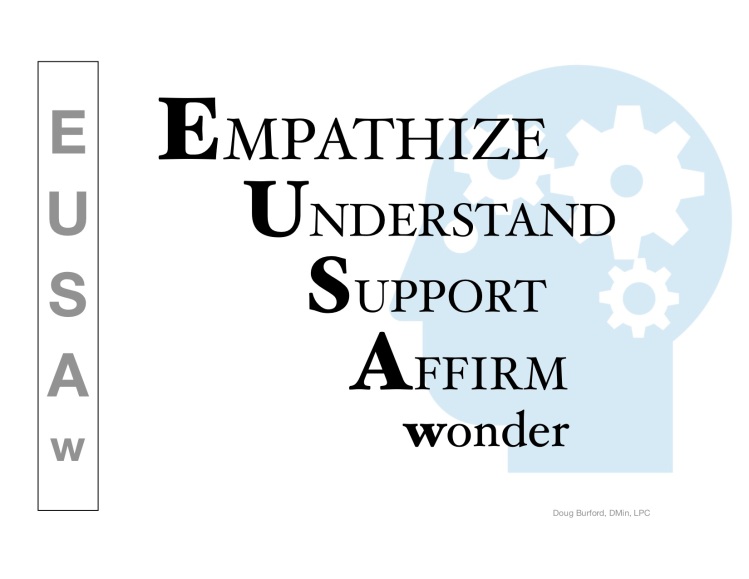 EUSAw – You won’t find it in a dictionary, and I wish it meant something from a borrowed language, but it doesn’t. It is, however,  an acronym for what is very useful to keep minor differences from becoming major battles.

The first thing we must do if we want connection, not contention, is to recognize what emotion is in the driver’s seat of the other’s brain at the moment (see the movie, Inside Out). Note whether the other is feeling excited, irritated, sad, hurt, prioritized, scared, put down, important, overwhelmed, unloved, appreciated, liked, etc. Notice it. Name it. Empathize. That is, get in the passenger seat alongside them. “How frustrating.” “I’m sorry.” “How exciting!” “That must have been disappointing.” “That had to be painful.” Empathy connects us; don’t skip it. Especially don’t minimize someone’s feelings or try to talk them out of what they’re feeling. Especially, especially don’t skip empathy in favor of fixes, criticisms, or repeating over and again your different point of view. Any of those will bring contention, not connection. Empathize first.

Secondly, understand—and voice your understanding—of the other’s perspective. Voicing  does not mean agreement, it means you listened; you heard. That’s love. That’s caring. That’s being there for someone. That’s friendship. That’s marriage, and family. If it helps, pretend you are writing someone’s biography for them and you’ve sought to get their perspective on something. After listening, you read it back to them: “So, you’d rather participate in planning something fun than be surprised, even if the surprise is fun. Is that right?” Ideally, the other will affirm what you got right, and maybe modify what you said a bit, if there was something missing. Now we’re in a position to argue them out of their perspective and into ours, right? Wrong! Perspectives will differ; that’s relationships. Why would two people with differing temperaments, different upbringings, maybe different genders, different life experiences, different tastes, different paces, different ideas about what’s recreational and what’s restful, have the same point of view on anything!?! Our goal isn’t to talk someone out of their point of view into ours; it’s to understand their different point of view so that we can be of support to one-another; yielding to one another as we share life, space, food, time, and decisions.

Support is best achieved through mutual yielding. If both are yielding to the other, then neither has to be fighting the other for right of way. It’s like an uncontrolled intersection in the country where two roads meet amid nothing but fields. No stop sign. No yield sign. It’s just understood that the two drivers approaching the intersection at the same time will seek to understand each other and yield to each other. They will read and gauge each other’s speed, given one another’s distance  from the intersection and—understanding what space and time the other needs to pass through the intersection safely—will yield to one another so that everyone in both vehicles ends up alive and unhurt. That’s the win. It’s not a contest; it’s consideration. For the driver further from the intersection to gun their engine in a challenge to overcome his greater distance and pass through the intersection first would be a pitiful display of immaturity. Mature drivers yield to one another. So it is in relationships. If you like arguing, competing, and winning, go find a job or recreation where that is a skill; in marriage and families, it is not. In marriage, spouses are there for each other, not against each other; they are the best of friends. In families, too, the idea is of a unit there for one another, not pitted against each other. The goal of marriage and of family is to be safe for one other. Empathic. Understanding. Supportive.

And affirming. People like being around people who make them feel good. In fact, research shows that good relationships have a very high ratio of feel-good to feel-bad interactions. People like being built up rather than being torn down. People like being celebrated for what they did well, rather than criticized for what they did wrong.” Instead of criticizing what someone did “wrong” according to your subjective opinion (it didn’t meet your standard, match your preference, accord with you style or pace or something else), can you instead affirm when they did it “right?” That is, can you paint the picture of what success looks like, rather than run the game film of their “mistake?”  Can you affirm what the other has done in the past, or on a regular basis, or affirm something about their character trait that you appreciate; something that meets your preference of the moment? For instance, instead of  criticizing with a statement like, “Why can’t you ever pick up your own stuff!?! What am I, your cleaning staff?” Instead, notice when things are clean and picked up and affirm it. Thank the other; tell them how nice it looks, or how peaceful the house feels when it’s in order. Be grateful, not critical. If that’s not your style, learn it. We know how. We do this with people we regard as important.

Lastly—and this is where your own perspective and needs come in—wonder out loud about options and ideas that might be a mutual win. You’ve already listened first to understand one another, including  the feelings that are driving the moment; now wonder aloud about ideas for supporting one another. “What would you think if I worked in the kitchen and you took the dining room, or vice-versa? Do you have a preference?”  Or, “Yes, I’d love to unwind after dinner; I wonder—instead of a movie, what would you think about watching something short?” The idea is a soft volley, not a hard edict. It’s an irenic idea brought to the table. It’s negotiation by offering what the other needs, not demanding what I need. It’s considerate and protective of the other. It’s voicing our consideration in an other-centered proposal. It’s friendship.

So, EUSAw… a prescription for fever reduction when brought about by chronic human interaction.

Home should be a place where everyone experiences safety, security, acceptance, nurture, comfort, care, love, and respect. Emotionally healthy people are relationally healthy toward others. Hurt people hurt people and loved people love people. It starts in the home. Home should be the healthiest emotional environment we have; the place where we are most loved, respected, honored, celebrated, and protected. Home is to be a refueling station; a retreat center; a MASH unit where we receive repair after being beat up by the world, infused with renewed strength and confidence to be sent out for the next round. Parents, of course, can’t expect to always receive these from children; it is the place of children to receive them from adults, such that they can supply the same to their own children, in time. That leaves the  adults in the house to unselfishly provide for each other safety, security, acceptance, nurture, comfort, care, love, and respect. This ensures a healthy supply for both parents to drawn upon as they dispense such other-centered attachment needs to their children.
Some adults enter parenthood with attachment wounds—deficits from childhood in these areas. It is harder for them to give what they did not receive. They reach into their experiential “bag” and it’s relatively empty of these experiences. In fact, the opposites might have been the norm. Mom or dad (or both) might’ve been physically gone for emotionally absent, due to work or educational demands, deployment, distractions, ill health, or mental illness. Or, abuse of a physical or emotional nature may have been normative. Whatever the case, the hardwiring of childhood safety, security, love, and nurture were only loosely wired, if at all. Many of these disadvantaged parents do their best to give their children what they themselves were not given. In doing so, they guess at what is normal. They model their behavior on someone other than their parents. They reach into someone else’s experiential bag and emulate what they find. This is the best that can be done, short of reparative experiences of safety, security, acceptance, nurture, comfort, care, love, and respect, post-childhood.
Parents with attachment wounds should not criticize themselves, nor be criticized. Rather, need to give themselves grace, and be patiently shown it by others, along with reparative attachment experiences by those fortunate enough to have received them. Attachment–disadvantaged must resolve to not repeat the negative patterns they experienced from their parents and caregivers, but to recognize what they lacked, and learn what they and their children need. Attachment wounds become a motivator to investigate how to provide it better than our own parents provided. Reparative experiences can be provided by an other-centered spouse with a healthier childhood attachment history. Reparative experiences can also be provided by God, the perfect Parent, who fully accepts us in our sin, loves us unconditionally, nurtures us constantly, and provides an eternal safe place of secure belonging. In the arms of this Father, many have been “born again,” with a new “childhood” in relation to a perfect Parent. As God faithfully provides every attachment need, they come to find a wealth of experiences from which to draw as they love, protect, respect and nurture their own children, and others.